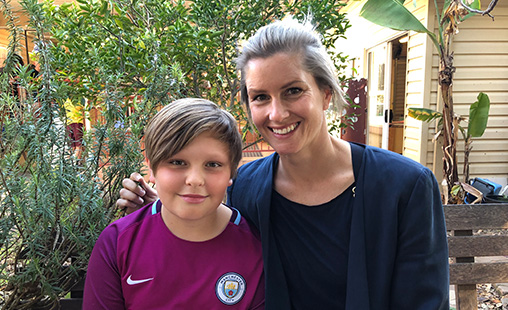 2018 was full of changes for my son Finn and consequently for our family.

After five beautiful years of primary school education in our local public school across the road we have taken the leap of faith and moved Finn to the 9-12 classroom of Forestville Montessori.

This is quite an unconventional choice, given that more kids start off at a Montessori and move into mainstream schools for primary.

As an expat family becoming part of a neighbourhood community was our priority for the early childhood years. Our local primary school was the perfect place for that.

So why the change for year 5?

Getting to know your older child more and more with all their individual strengths and weaknesses and an increasing focus on academic and personal development made me realise that there might be a more suitable learning environment for Finn out there.

As to be expected, Term 1 started of with a new found excitement for school – fuelled by new friends, new teachers, new surroundings and the ever so grown up aspect of using public transport and his own phone!!! The challenge of course, was using all this independence and freedom towards learning as well as socialising. I am sure this wasn’t and isn’t a small feat to be achieved by his educators. Even though their patience must be tested on a daily base I have come to believe that the Montessori approach is finally working for Finn.

Term 2 has probably been the trickiest learning curve so far – the novelty had worn off and the expectations for Finn to step up as an independent and self-guided learner as well as a constructive member of the classroom, brought him back to school day reality.

He seemed to be supported through these challenges with compassion, acknowledgement of his individual needs and a healthy dose of discipline and structure.

Now at the end of term 3 I can whole heartedly say, transitioning Finn from a mainstream school to Forestville Montessori was a great decision for him as an individual as well as for us as a family.

This new level of having a say and being given independence with structure has made him grow into a more confident and upbeat version of himself – he’s even quite chatty actually. The car conversations are no longer reduced to yes, no and I forgot. I hear names now, full stories even and when asked what he did at school it seemed exciting enough for him to remember and summarize in more than one word.

His ability to pick up on social dynamics and read between the lines has increased massively and at times he surprises us with quite forward thinking contributions.

There are still enough hick ups to learn from but he seems to have found more words to describe what he’s experiencing. The influence and guidance of his peers (younger and older) as well as a more personal approach by the teaching staff seem to give him the feedback he needs to learn. Finn has found a lovely group of friends that share many interests and a good sense of humour whilst rating support over competition.

He starts thinking more about what he can give instead of what he can get. Gradually we see elements of that here at home – even with his brother.

For us Montessori is more of an extension of our parenting ways at home. Given all the different ways we’ve seen our son transform over the past school year makes us think we are all moving in the right direction!