A Parent-to-Parent argument
for a Montessori Education.

“I beg the dear all-powerful children to unite with me for the building of peace in Man and in the world.”
Dr Maria Montessori

This quote on Maria Montessori’s grave, is an indication of the immense respect she had for children and her incredible belief in their potential. When you position this way of thinking in the times Dr Maria Montessori was living, you can begin to sense her vision. She was a woman ahead of her times. She was a pioneer in so many areas and today we look back on her life in awe of her many achievements. One of the most impactful is the gifts that she gave to education. Her legacy continues today to serve children and their educators worldwide.

She was born in Chiaravalle, Italy in 1870. She was the first female doctor to graduate from medical school in 1896. Her clinical observations in her medical practice led her to analyse how children learn and how influential their surrounding environment is.

So much of what Maria Montessori observed has now been proven by scientific and educational research. Her work in hospitals, particularly with children suffering from nervous disorders, led her to a study of the development milestones. She concluded that their problems were educational rather than medical and from her findings grew the concept of a holistic education, one that caters to the “whole child”.

She established the first Montessori School in Rome in 1907, using a much broader curriculum than had previously been considered. Knowledge of Dr. Montessori’s reputation as an innovative educator spread throughout the world and Montessori Societies were formed in Britain and America.

The cornerstone of her methods was the belief that education should be tailored to individual needs. From this flowed her concept of “vertical grouping” or bringing children of three age group differences together in one classroom.

Thriving Beyond is a fitting way to conceptualise a Montessori education. Beyond rote learning, beyond boundaries, beyond telling children what to do to expecting children to think for themselves, beyond the separation of the mind and the hand, beyond gifted to celebrate joyful scholars and guide children to take their place in the world as mentors and leaders of the future.

A Montessori Classroom is a Unique Learning Environment

The teacher works in collaboration with the student, serving as an enthusiastic guide as the student progresses from simple to complex understanding. In addition to learning from one’s own experience, students also learn best from other children.

Students care for the animals that live on site; lizards, birds, snakes, fish, rabbits are amongst some of our animal friends.

Classes have a 3-year age range giving younger students a series of models for imitation and older students the opportunity to reinforce their own knowledge by helping those that are younger.

Students have the same teacher for 3 years allowing the teacher to develop a stronger bond with each student and a deeper understanding of each student’s individual needs, leading to more successful learning.

Students have a morning snack / break time when they are hungry and enjoy nature outdoors in a calm, tranquil setting with adventure play for the lunch period.

The indoor and outdoor environment is prepared by the teacher to provide students with stimulating activities with expectations increasing as students get older. We design our learning spaces to offer a seamless flow from indoors to outdoors.

A 3-hour morning work cycle exists allowing a child to focus on the task they are working on without being restricted by short time periods.

An atmosphere of respect, calm and safety pervades each environment.

Students can work where they are comfortable, move around and talk at will while not disturbing others.

There is freedom within limits and students are allowed time, freedom of movement and choice within the appropriate socially accepted behaviour of the community.

Students move to the next class when they are ready. Age is a guide, but readiness determines when the time is right. This can be during a school year.

Students grow and cultivate our gardens with the assistance of a resident horticulturist.

Students dress to reflect their personalities this is why we do not have everyone wearing the same uniform.

We call everyone – staff and students – by their first names. This is because we are all equal learners.

We encourage parents to schedule observations in classrooms to see first-hand the learning taking place.

The Birth – 6 classrooms are prepared by scaling everything down to the student’s size and gearing all materials to their inner needs. This allows the student to learn by making their own choices and by moving at their own pace. A classroom environment is best understood by a student when they can make immediate personal contact and have a hands-on experience with everything in the room.

An important element in the Montessori philosophy is the view Dr Montessori took of children as unique human beings. The view evolved over time as she observed children in their own environment and in the “prepared environment” of Montessori classrooms in different parts of the world. The Montessori system of education is child-centred, and teacher facilitated. The needs of the child are paramount.

The Montessori classrooms are carefully prepared and ordered learning environments, organized to meet the needs of children at different stages of development. The environment promotes respect for self and others, awareness and consideration for the needs of fellow human beings, developing the child intellectually, emotionally and spiritually.

Dr Montessori observed that children pass through periods of acute interest in specific aspects of the physical and social environment. She called these the ‘Sensitive Periods’ and designed Montessori classrooms with a range of distinctive, concrete materials equipped to respond to each child’s particular sensitive periods. These materials spark and hold children’s interest and lead them comparatively effortlessly to educational knowledge.

The Montessori Method and materials develop within the child the ability to work independently and collaboratively in order to fulfil their individual potential. The child has the opportunity to develop qualities of self-esteem, independence, self-reliance and self-discipline, and to build the skills of concentration, research and orderly work patterns. Social awareness and responsibility are also fostered in children who are educated in the Montessori Method. The Montessori Method is unique in that it allows the educators to treat each child as an individual.

Read the latest on our Blog 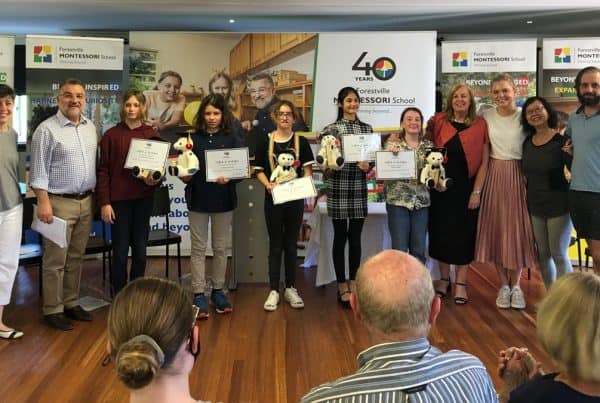 On Tuesday 7th December we said farewell to our 2021 Graduates, we are so proud of each one of them. We were lucky to be able to invite their parents and grandparents to celebrate with us, it was wonderful to once again have families on site to celebrate this special event. Our Graduates prepared some touching speeches, we hope you enjoy reading them. Zoe Prate  We held a small farewell…

Practical Life for the Holidays

The holiday season is nearly upon us, and no matter how you celebrate, this time of year is often steeped in family traditions. The foods, smells, decorations, songs, and gifts echo in our memories for a lifetime. As a parent, it can be magical to experience the holidays through your child’s eyes; everything is so exciting and full of wonder.   Many families involve their children in preparing for special days…

Graphic novels are having a moment. There was a time not long ago when it was easy for most adults to view them as “not real” books. Today we know that couldn’t be further from the truth. Many graphic novels are of very high quality; the plots and characters are well developed, and they are recognised for the important contribution they make to youth literature. They can motivate reluctant readers…
See Full BlogSee Full Blog

Ready to get started? Book a tour now!