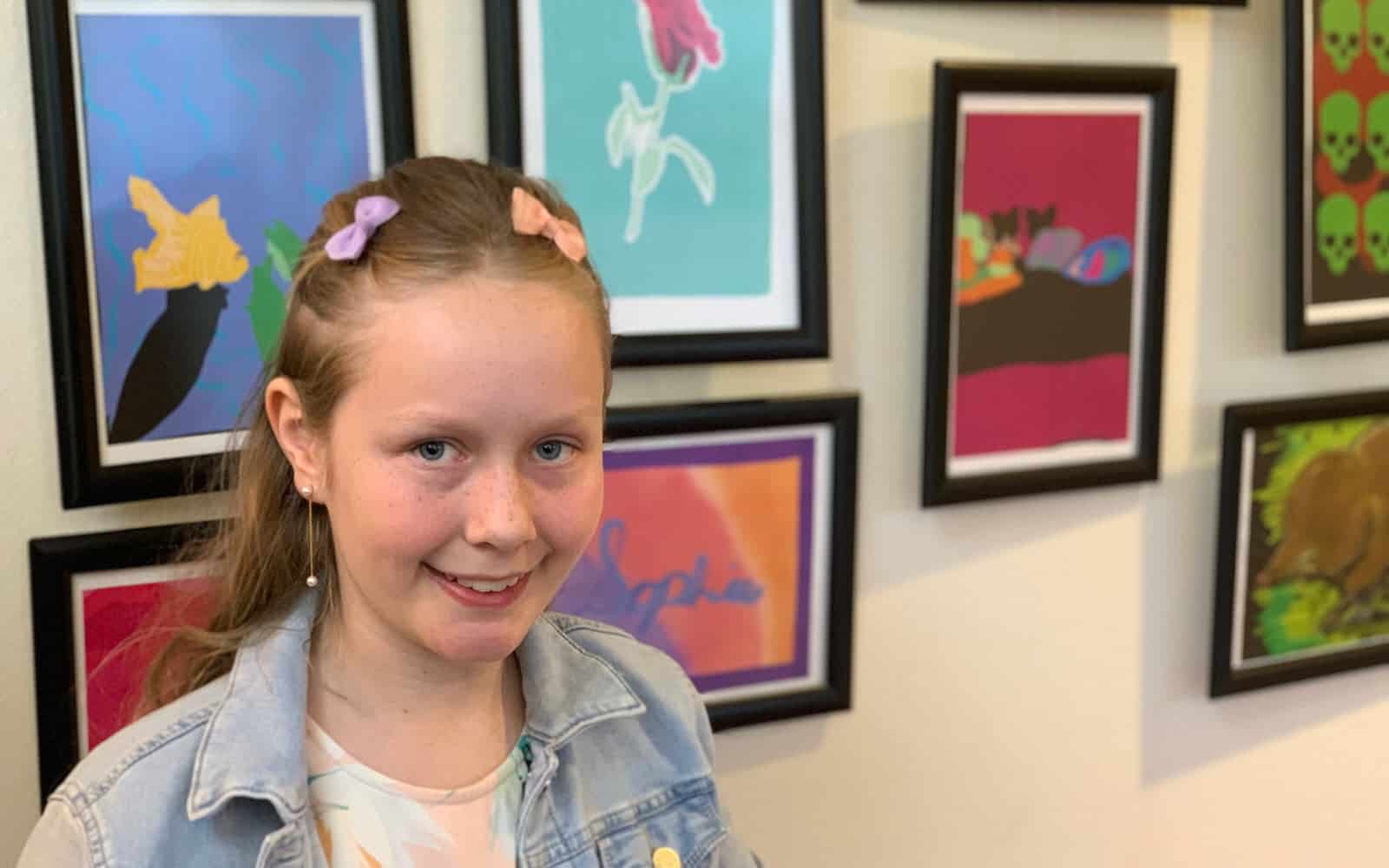 “I remember the feeling of having freedom to learn new things and unlike my last school, we didn’t have to spend so much time lining up for everything!”

Nishabel Rehn joined FMS in the lower Primary (6-9) and had Anthony Milano as her educator.

‘It was very different, and I liked it instantly.  We could choose where we sat to do our work and I had a lot more choice about what and how I wanted to learn.  It made me love FMS right away.  We learnt very quickly that with freedom comes responsibility.”

Now in the Upper Primary (9-12) and graduating this year, when asked about her favourite subject her eyes were alight with enthusiasm: 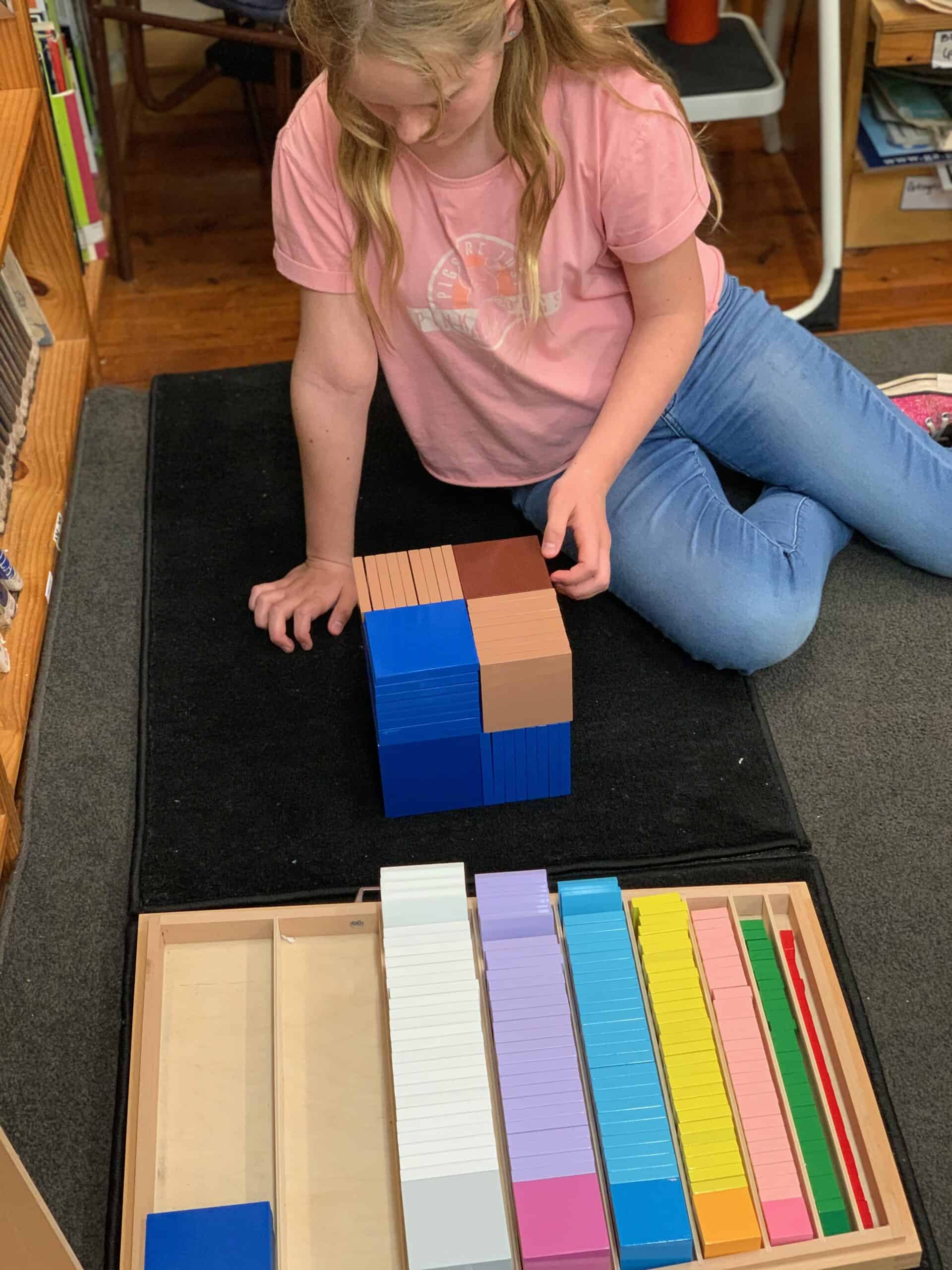 Mathematics comes a close first to other favourites like reading.  It seems that Nishabel is a fine example of someone who lives to learn, and it doesn’t stop just because school is out!  She was keenly enthusiastic to tell me that she has three books on the go currently and is probably a bit if a bookworm:

“We read one book as a  group, we choose one book to study personally as a Graduate and I’ve got one book on the go at home.”

It’s the titles that make you raise your eyebrows and show you that when the expectations are right for students, they rise to the challenge.

‘The Hobbit’ by J.R.R. Tolkien, ‘Watership Down’ By Richard Adams and “Harry Potter- The Half Blood Prince’ by J. K Rowling

There’s a quiet confidence equalled by an insatiable appetite for learning that is definitely going to take Nishabel easily on her next journey to Secondary school.  Set homework is not part of the Montessori approach but it clearly doesn’t stop Nishabel from taking her learning beyond the school gates.

“I’m working on a project on climate change and because I couldn’t decide on just one thing to research, I’m also looking at animal agriculture, animal abuse and veganism.”  When asked if the work is done at school, she remarked that “Lots of the research is just ongoing and you don’t really stop because there’s always more to learn.”

We launched into a very informed discussion about climate change followed by her indication that her research into animal cruelty has resulted in her choice to be a vegan.

‘I was pescatarian at 7 years old, vegetarian at 9 years old and now I’m vegan.”

Like her brother, Levi, an Alumni of FMS who graduated in 2018, she cooks vegan food at home and loves it.  It’s hard to know how she find the time with a menagerie of animals to care for including:

Before COVID-19 closed sporting venues she was pursuing synchronised swimming but thinks that may not be something she’ll continue with.  For now, she has a new passion- learning Auslan.

“You can talk without speaking and I can even talk with my mouth full!”

It’s an inspired choice of extracurricular for a 12-year-old but like all her thinking, it’s well-reasoned and intentional,

“During lockdown, I started teaching myself the Auslan alphabet, other words and the song ‘You are my sunshine.”  It’s a special song because my grandmother who passed away recently used to sing it to my mum.  Now I can sign it too so it’s kind of in my grandmother’s memory.”

The inspiration for learning sign language is fascinating and gives you an insight into her inner world:

“It was after reading the book, “Song for a Whale’ by Lynne Kelly, where a girl who is deaf goes on a journey with her grandmother who is also deaf to find a way to help a whale to communicate.  They invent a song that makes the whale feel a really strong sense of belonging.  I know a lot about  signing because my parents work with people who are deaf.”

When asked what she’s going to miss about FMS, she had a list:

“The people, the materials, cooking vegan strawberry shaortbread and choosing your work.”

Something tells me that it won’t be long until Nishabel settles into the swing of secondary education and that the swing will be influenced by her beat!

Keen to see how a Montessori education can help your child thrive beyond like Nishabel? Book a virtual tour today!