By Denice Scala4 November, 2021No Comments

For this month’s Materials Highlight we bring you the fraction insets; a beautiful set of metal templates resting on slanted wooden trays. As you can see in the photo above, the insets range from one whole through tenths, and each piece has a small knob allowing children to move them easily.

But before we get to the insets, perhaps we should back up just a bit.

Prior to an introduction to fractions, the child has had extensive instruction and experiences with numeration being based on the unit. One unit (or one, one whole, etc.) has been the basis by which they have learned to count, skip count, add, and subtract. As the child enters Pre-School (3-6 Years) they are ready to learn how we may divide a unit.

This work often starts with an apple. The Montessori educator sits the children in a small group and tells them the apple will be divided for them to share. They then proceed to cut the apple without any regard to straight or even lines, creating small chunks and larger ones. The children quickly realise the injustice in distributing such apple slices, so the guide takes out a second apple to cut it evenly and impart the importance of equal slices being fair. The stage is set for learning about fractions. 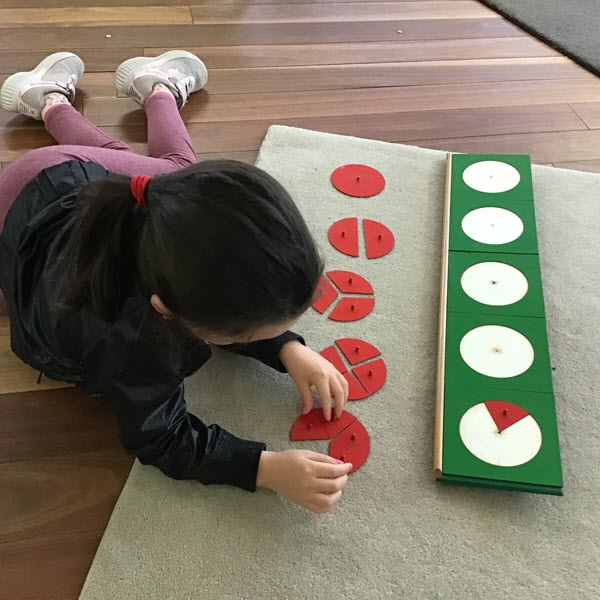 It’s important to note that while the most used and popular fraction insets are circular, there are also triangular and square fraction insets. It’s important for educators to refer to this at times so the children have an understanding that anything may be divided, not just circles.

The first-time children use the insets they are encouraged to observe what they notice, and they develop the concept that each inset is a family of sorts. “These are the thirds, these are the sixths, etc.” 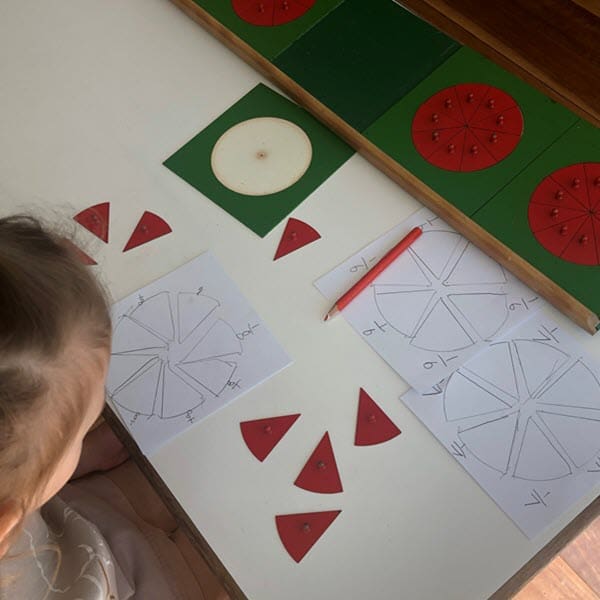 During this lesson, the educator doesn’t use the term numerator just yet. What is emphasised is that while the children previously learned the family names of each inset, the focus will now shift to individual pieces. Examples will be shown using the material, and both verbal and written expressions will accompany each.

For example: “This is one third, or ⅓.” “This is four fifths, or ⅘.” This may be the end of the lesson, or, if the children seem to grasp the concept quickly and easily, it may be combined with the third presentation.

The third presentation is essentially a culminating review of what has been covered so far. The children may take turns matching labels with fractions to show their understanding. The critical piece is that the guide will now formally name the numerator and denominator.

There is a lot of opportunity for practice and extension work at this point. Children may trace and label fractions, make booklets or charts, work together to match labels, and so on. This work typically happens during the first year of Lower Primary (6-9 Years). 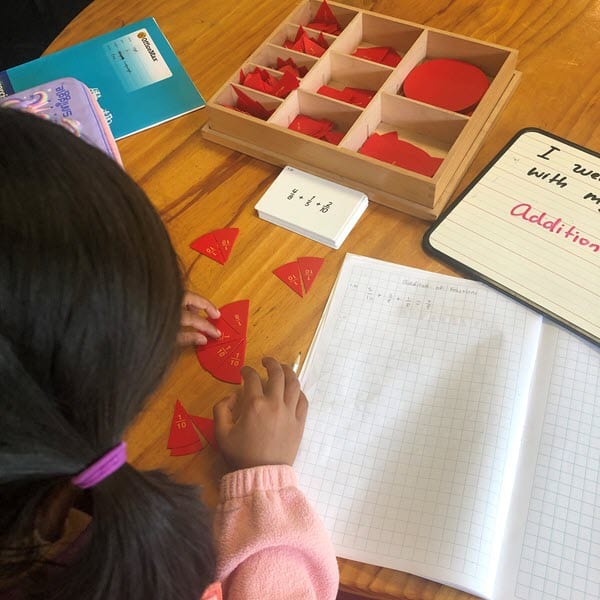 This is an exciting lesson for children. Once they have a firm grasp on naming fractions, the educator will again sit them down in a small group. The one whole circle will be removed from its frame and the two halves will be put in its place. The guide will show the children how one whole is equal to two halves. This will be repeated with similar equivalencies: 3/3=1, 4/4=1, etc.

Next, smaller equivalencies will be discovered. The educator will try and fit a piece into several different spots, proving where it does and does not fit. Children will learn several simple equivalencies, such as 2/6=1/3.

As with the previous skill, there is plenty of opportunity for exploration and extension regarding equivalencies. This is arguably the most important fractions skill of Lower Primary (6-9 Years). 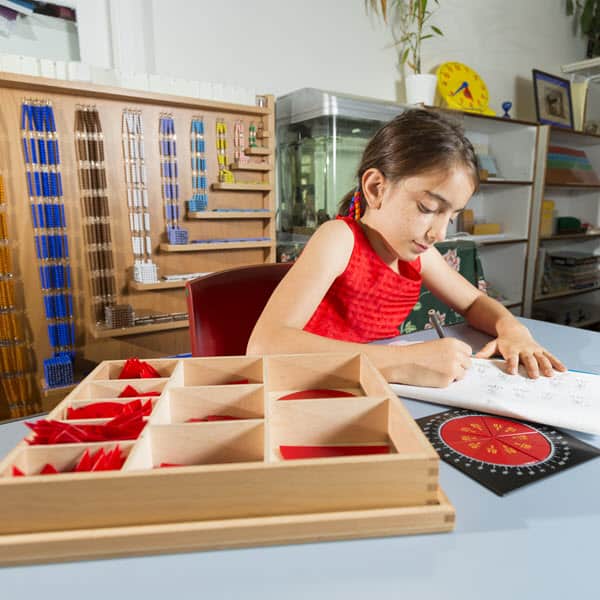 Once a child has a firm grasp of fraction basics, they are ready to learn operations. This will likely begin in lower elementary and extend into Upper Primary (9-12 Years) and are taught initially using the fraction insets material. Another material often used is called the fraction box, which includes small plastic replicas of the red circular fraction pieces. Skills include:

Use of materials when teaching fractions is critical; we believe Montessori students excel later in life with more complicated math concepts because they have such a strong foundation in the basics. Rather than memorising rote procedures they are physically manipulating numbers with their hands, giving them a deeper understanding of why we do what we do.

One cannot rely on materials forever, though, and there comes a time when the child is prepared to move onto abstraction.

This is often achieved by the teacher again showing an operation with the material while also writing out the pencil and paper process simultaneously. In fact, children will often come to this learning independently. They can make the connections as they master skills. If not, the educator is there to show them the way. There comes a point during the Upper Primary (9-12 Years) when a child no longer needs to rely on the materials to determine the answer to a problem. In fact, using the materials becomes cumbersome, and they are eager to put them behind.

Want to learn more? Once these COVID restrictions lift and parents are allowed back onsite, we encourage you to reach out and set up a time to observe. Reading about Montessori education is important and enlightening, but the very best way to understand is to see it for yourself.

And the next time you make pizza at home, turn it into a fun fractions game!