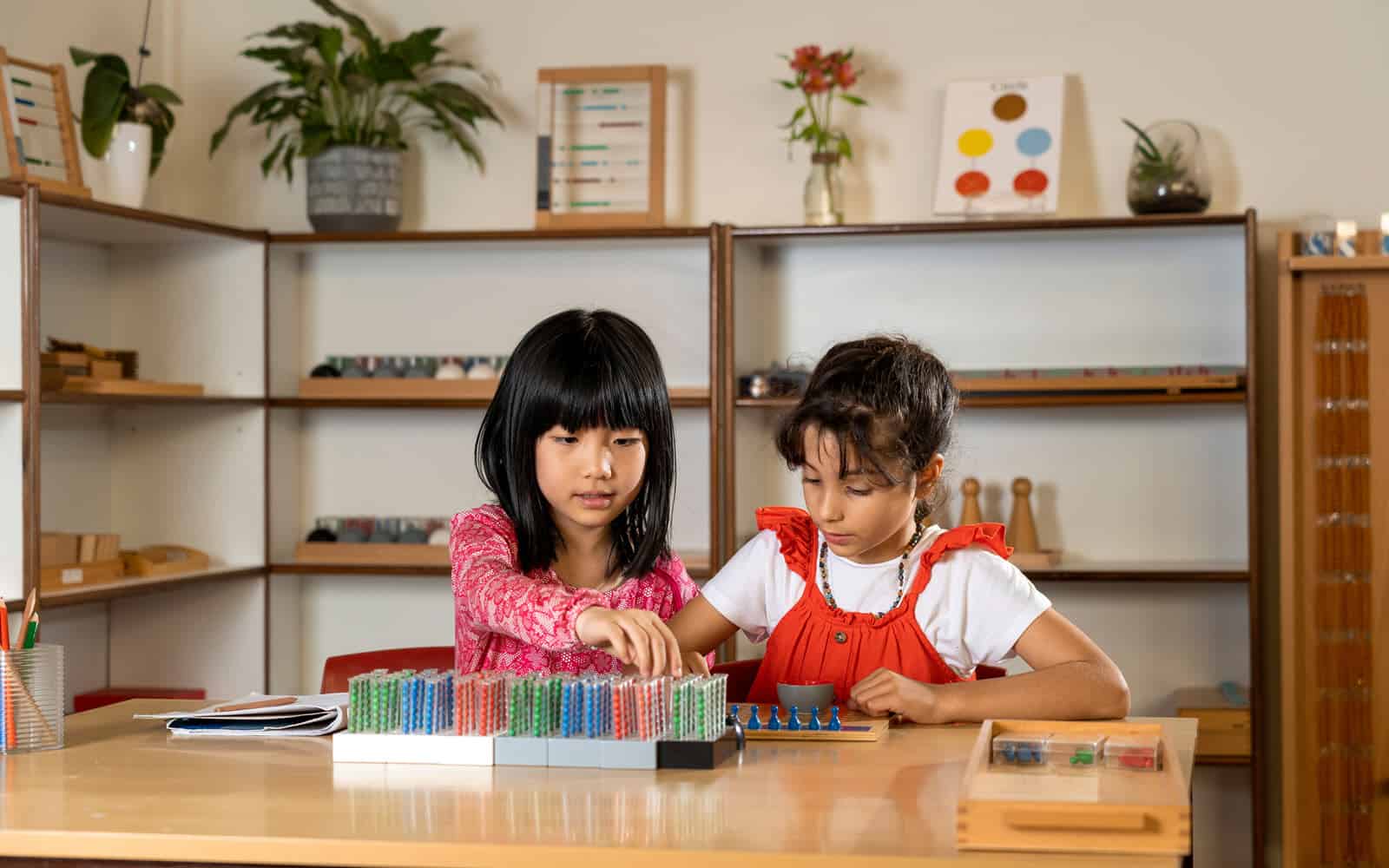 Resetting our Thinking: Why the Montessori Environment for 6-12 Year Olds is Different from the 3-6 Environment.

This article was originally published by Trillium Montessori and is adapted to reflect FMS learning environments.

When people talk about Montessori education often what is described is a 3-6 classroom experience. Most people think it is an education only for pre-schoolers and are quite surprised that there are Montessori environments for primary and high school students, and even the aged! We know that the 3-6 is the age of development where Maria Montessori started her work with the children in Rome when she was fresh out of medical school and was the age group that she spent most of her time with. It is also the age group that parents who are looking for an educational environment for their child will begin their journey.

The Montessori movement has mirrored her focus, and all over the world there tends to be more 3-6 Montessori environments than any other age level.  So, it makes sense that when people talk about the Montessori approach, that they might just think that same ideas around child development apply to all age groups.

However, each environment, be it for 6-12, 12-18 or the aged are distinctly different from the 3-6 environment….and they should be! The environments are prepared in response to the specific developmental instincts, urges, and inclinations of the age group.

As FMS is a pre and primary school, let’s look at some of the ways in which the 6-12 environments are noticeably different from 3-6 environments.

6- to 12-year-old students like to work with their friends and in groups. Developmentally they have a “group instinct.”  They not only enjoy working together, but this collaborative work is necessary and important for optimal development.  The guides will give most lessons to small groups or pairs, whilst in the 3-6 it is typically one on one. There is an expectation that the 6-12 students will collaborate when using Montessori materials, on their follow-up work and other projects. Through group work, children engage in discussions, negotiations, debates, and dialogues. Through partner and group work they are refining how to use language in different ways, and how to refine their communication skills. 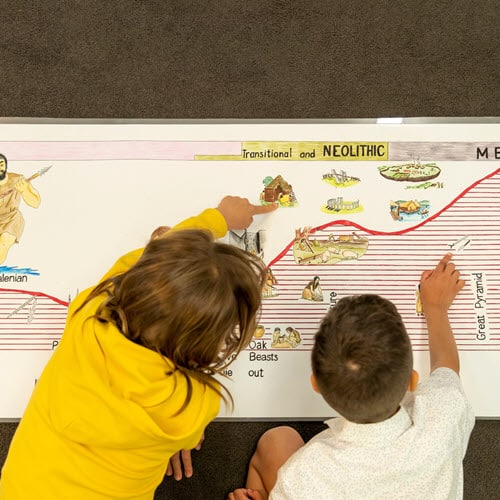 In contrast, in 3 to 6 classrooms you will find children mostly working alone, or in pairs. They are often seen working alongside one another but not in a collaborative fashion. 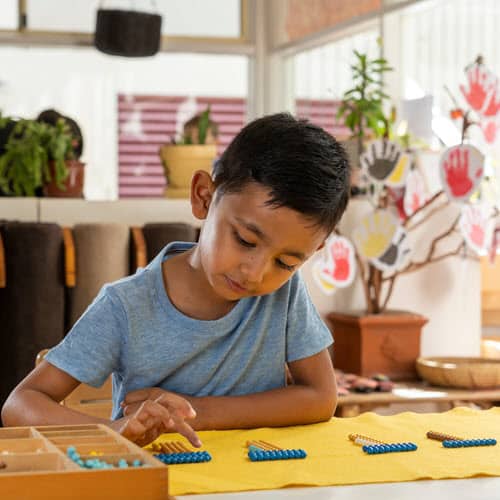 We all know that when students are engaged in group work there is going to be a lot of conversation, both on and off topic. Developmentally talk is encouraged. It is also a time for children to practice appropriate volume levels of talking, when to be loud and when to bring it down. Student’s in the 6-12 also learn to let the class know when it’s too noisy for concentrated work.

In the 3-6 classroom, almost everything a child needs to complete an activity is found on a self-contained tray displayed on a shelf.  That way, the child can take a tray off the shelf, find a place to sit, and rely on the notion that everything they need for the activity is on that tray.

This is not true for the 6–12-year-old! When a 6–12-year-old is considering using a material on a shelf, they also need to think about where to find a pencil, where to find paper (and think about what kind of paper they need), where to find a clipboard.  And if a student is planning a “big work,” such as a poster, a timeline, or even a science experiment, they need to think of all the materials they will need to execute the project or activity and gather them together from various areas of the classroom.

One of the amazing aspects of the 6-12 classrooms is that students have lots of opportunities to exercise their executive functioning skills. Having increased options that no longer involve having work or activity completely self-contained on a tray gives them practice planning for what they need, thinking about where each of those things are in the environment, gathering those things together, and creating something fantastic.

We Give Them the Universe

The 3-6 child learns all about the Earth and their place in the world. In fact, Maria Montessori originally wanted to introduce the world to children aged 6 to 12 but she discovered along the way that 3- to 6-year-olds were very interested in learning about the earth, so she decided to show them the earth, its landforms and continents, and its people, plants, and animals. 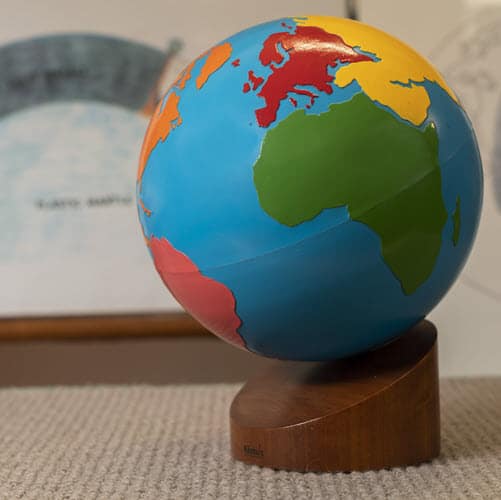 However, Montessori takes this further and gives the 9- to 12-year-olds the keys to the universe! Montessori calls this ‘Cosmic Education’. There is no topic that is off limits in terms of knowledge acquisition.  Children are introduced to cosmic education and receive lessons in the topics of math, language, geometry, history, geography, biology, art, and music.  Children see and learn through the integrated nature of the subject areas and curriculum. They get ‘big picture’ ideas and can focus on details through presentations that are starting points for further interest-based research. 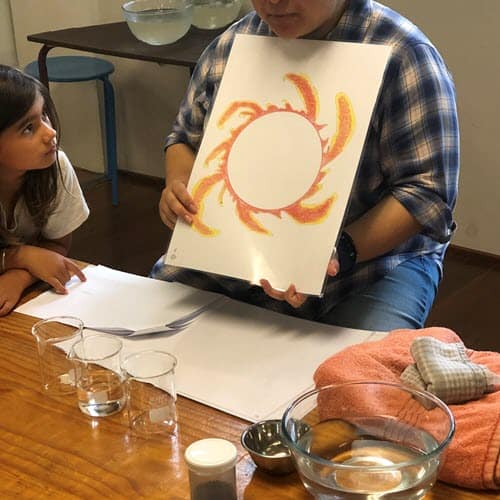 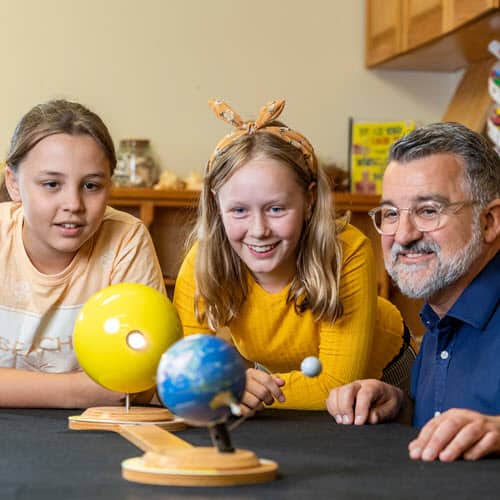 In the 3 to 6 classroom, children repeat activities over and over again. It’s as if they have an inner urge, or instinct, to do so, which drives them to master and perfect fine motor skills and aids in development of concentration.  You might walk into a 3 to 6 classroom and observe a child washing a table for an hour, and then see them return to this same activity the next day! Or you may see a child take out the Red Rods, a Montessori material, and use them every day for a week.  Children this age love to repeat by doing the same activity over and over again. 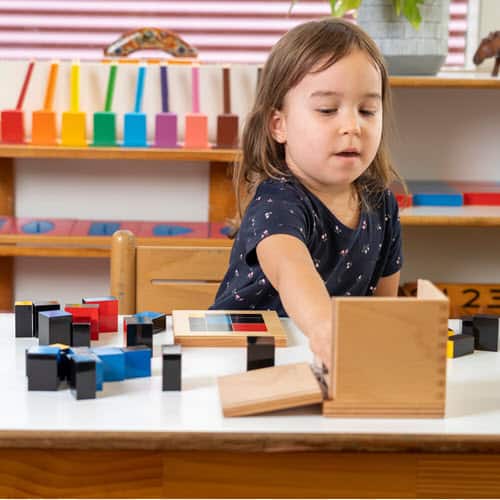 The 6 to 12 student, however, no longer derives satisfaction from this kind of repetition.  They like to repeat by way of variety, and through “big work.”  When a 6 to 12 student is mastering multiplication, they have several materials in the classroom they can use to help them: the large bead frame, the checkerboard, the bank game, the flat bead frame, just to name a few! With each material they are given a variety of presentations which automatically create repetition through challenge, self-constructed tasks, and practice. 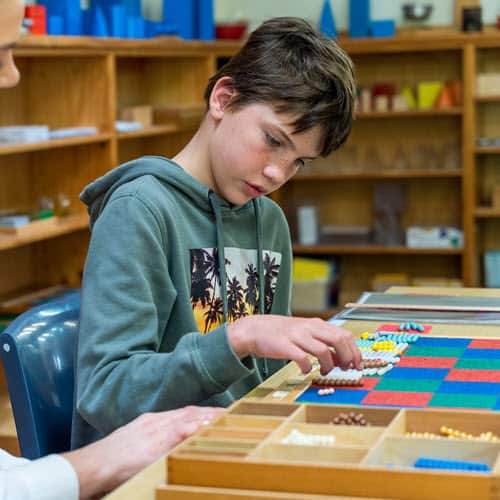 During the first plane of development, birth to 6, the absorbent mind is at centre stage.  The children are taking in everything from their environment. Therefore children are able to acquire knowledge and skills, such as walking and talking and even learning a foreign language, with seemingly little effort.

However, when the child enters the second plane of development, 6 to 12, the absorbent mind is no longer at play, and instead the reasoning mind comes to the forefront.  The child is no longer just interested in knowing the names of things, they want to know “how,” and “why.” The reasoning mind is hungry for big topics across the subject areas, which includes topics that are not typically taught in primary school. Think about the use of timelines in 6-12, the Timeline of Life and the Timeline of Human Beings. These materials provide just enough information to stir the reasoning mind such as “I wonder what the world would be like if dinosaurs still walked the Earth? Or “Who were the first humans who died discovering poisonous plants?”

When people think of Montessori, even those who know very little about the method usually know that independence is a huge factor.  However, the focus moves away from physical independence activities surrounding dressing, eating, toileting, and etc, to the arena of intellectual independence. 6- to 12-year-old students are now being exposed to the ideas and thoughts of others and are beginning to formulate their own opinions and ideas that may be separate from their family of origin.

Order of the Mind vs. the Environment

While we can hope that the attention to detail and order that is cultivated in the first plane of development will continue into the second plane, this is not always the case. It has been observed many a time instances of previously orderly 5-year-olds moving into 6 to 12 environments and becoming less orderly than before. But is it true that they are less attuned to order? Not exactly! They are shifting their focus towards order in their minds. As they are now in a stage where abstract thinking and imagination is developing, there is a lot of classifying and organizing happening within the mind.

This might mean that external orderliness is not as apparent, but it’s mostly due to the fact that there is much energy being expended on internal order.  You will likely not see in the 6- to 12-year-old student the same level of tidiness that is observed in a 3-6 classroom. However, it is reasonable to expect that even if the project or follow-up work area is in disarray during an activity, there are expectations that work areas be tidy at key times of the day, such as before lunch, or before going home at the end of the day.

As you can see, there are LOTS of ways in which the 6 to 12 environments are different to the 3-6 environment, in terms of how it’s prepared, and how the children interact with the guide and with each other.  The reason for this is because the 6 to 12 child is now in a new stage of development, so what worked for the younger child will likely not work for older children.

Want to see our Pre-Primary and Primary classrooms in action? Book a personalised tour and have a chat with me today!