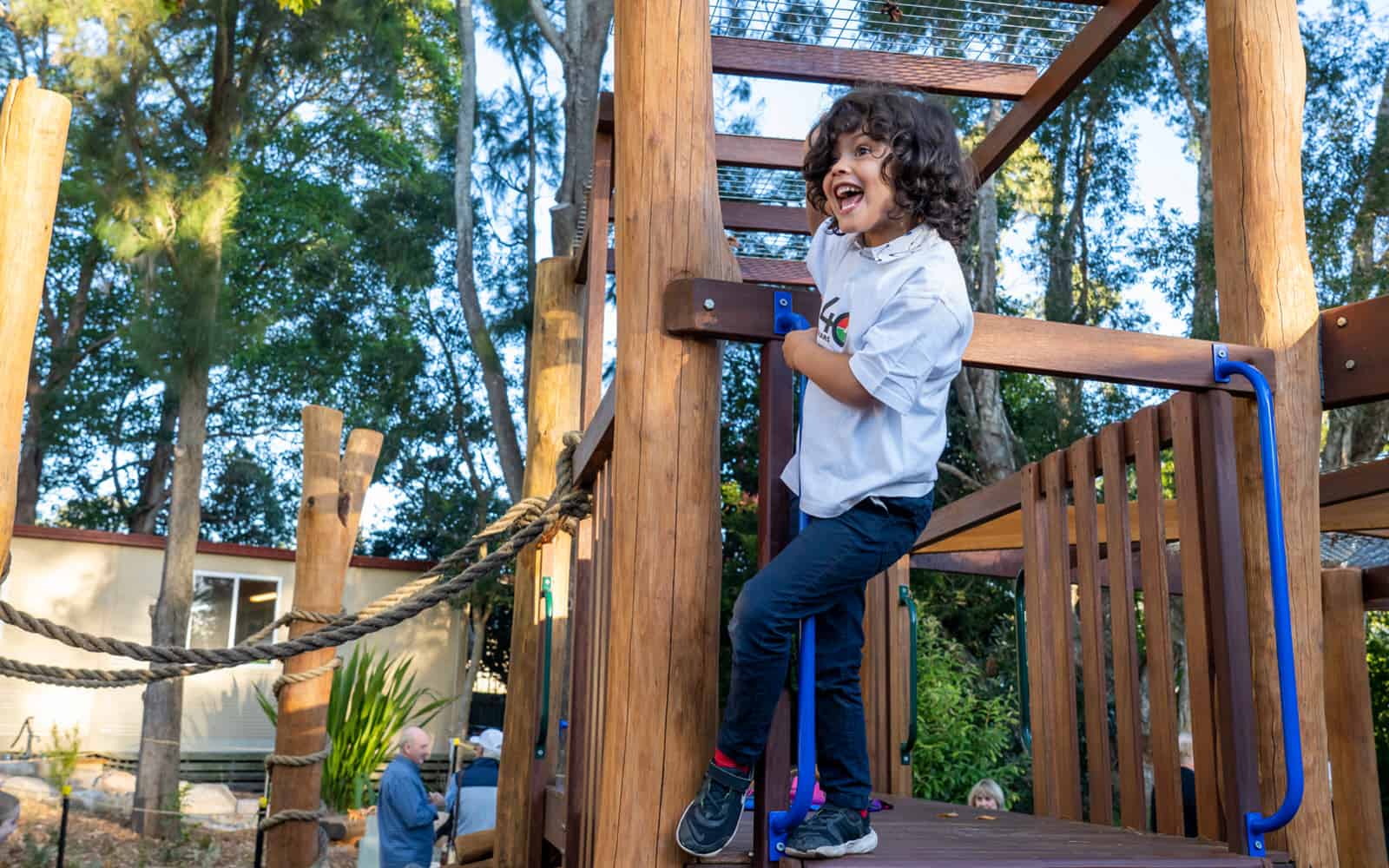 Thriving Together for 40 Years!

Thriving together is our theme for 2021 and how fitting it is after a year of thriving as a community beyond a global pandemic to be here today to celebrate 40 years of world-renowned Montessori education.

Continuing today on its original site, the land for FMS was purchased in 1980 so the school could open in 1981.  Forestville Montessori School is going from strength to strength.  We gathered on Friday 30th April 2021 to officially launch our 40th anniversary and open Kurrun Karni– A Place for Children.

Kurrun Karni is our beautiful new 3-6 outdoor learning space. We were sorry that aboriginal Elder, Uncle Neil Evers Garigal Man was unable to join us as he was in hospital. However, he plans to be back in NAIDOC week to conduct the Smoking Ceremony and official naming of Kurrun Karni– A Place for Children.

Gabriella Broomfield and Daniel Morazzoni , 2021 Graduates, introduced Aunty Lois Birk who acknowledged the land and spoke to the children about taking care of the land and nature. 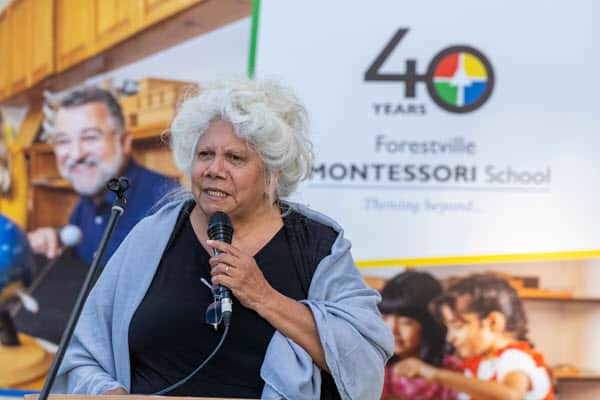 Chris Rehn, Chair of the Board of Directors addressed our Founders, parents, staff and children. He talked about 40 years being a significant milestone and the incredible vision of our Founders.  It’s hard to believe that 40 years ago you had to look overseas to find out about Montessori education, but our Founders stopped at nothing to make FMS a reality.  Hank Van Gasselt, one of our Founders even travelled to Holland to find our first ever Montessori teacher & Principal.  His name was Paul Seibel.  He trained at The International Centre for Montessori Studies Foundation in Bergamo, Italy which was the first centre established for Elementary (Primary 6-12 training) in 1961 by Mario Montessori, Maria’s son. 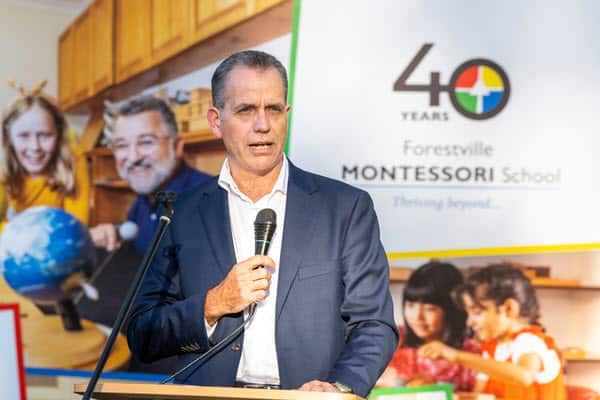 Chris continued by commenting on the governance role for Directors to ensure a bright future for FMS, building on the Founders’ legacy.  He thanked the school’s leadership team saying that Management’s work now places the school in the enviable position of being able to embark on an ambitious capital works program of asset renewal and reconfiguration.  This kicked off with the recently completed 3-6 playground which everyone was invited to view.

He thanked parents for their unwavering support and invited them to consider becoming an Ordinary Member of the Peninsula Montessori Association LTD (PMAL).

He told the story of how the first Treasurer; Wally Tarrant passed his hat around and asked everyone who was going to send their children to FMS in the next 3 years to pay up in advance, so they had the capital to start the school.  Joking that thankfully, we no longer need to do what was done at one of the first FMS Board meetings. It was a lovely reminder to families that today, we benefit from past donations, reminding families that contributing to the building fund was tax deductible.

Chris Introduced Carl Birdsall, Sue and Rodney Birdsall’s son, as Community Team Leader.  Carl was then off to cook the BBQ!

Our Founders formed an Association called the Peninsula Montessori Society.  They joined together with interested parents from Northside Montessori School.  Together they purchased the land that FMS is housed on today.  It had been a small catholic school in Angel Place consisting of 4 classrooms.  In no time at all the divisions between the 4 classrooms were removed and the space rearranged as a Prepared Montessori Environment.

Next, we offered three cheers for our Founders and our students presented gifts.

We couldn’t let a day like this go by without thanking our Board Directors who give so generously of their time and expertise.  Students presented them with a token of our appreciation for all that they do for the school. 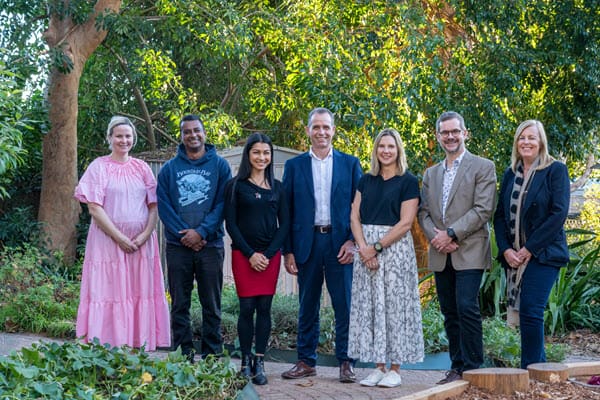 Our parents faces say it all as they listened with joy to their children’s performances.

Music at FMS is such a rewarding experience for our students. Thank you to Tamara O’Brien our music educator. 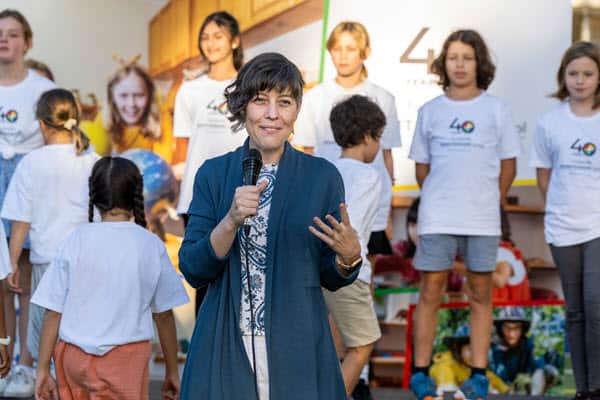 You can’t have a party without great food and our BBQ chefs were second to none.  Thank you Koren, Carl, Sam & Nitzan!

Sue Birdsall, one of our Founders did us the honour of cutting the red ribbon to officially open Kurrun Karni– A Place for Children – our new Pre-Primary (3-6 Years) play space.  At a total cost of $131, 824, made up of:

This beautiful outdoor learning environment was made possible by the generosity of parents over the last few years.

Time for Parents to Mingle

It was great to see so many parents join our celebrations.  After a full year in 2020 of COVID restrictions, parents didn’t waste time in socialising, connecting, and making the most of the wonderful community at FMS.  As one new parent commented “You can feel the warmth of this community.”

Thank you to our Class Parents who hosted parents and took time to chat.

40 years on and our Alumni are connecting back to FMS.

Hope over to our FMS Facebook page to see the first of a video series featuring our Alumni.  We’d love to encourage people to visit our Facebook page or our Instagram page regularly.

It wouldn’t be a real party without cake.

Our roaming drummers signalled time for all our guests to return to the main stage, Kayla then entertained us with her magnificent classical guitar playing.

There were so many memorable moments at our celebrations.

Jenny and John Williams, FMS Founders, with their grandson.  Their son, Greg Williams is an FMS Board Director.  They also have two other sons who attended FMS.

Matty van Drempt caught up with Sue Birdsall. Did you know Matty was one of the early 3-6 Directors at FMS?  Her two children attended FMS and she’s now back sharing her wisdom with parents in the Birth-3 community! Here she is with Sue Birdsall, one of our Founders and a fellow Montessori educator.

Then just like that, the sun was setting on a day to remember.  The day we honoured our Founders.  The day our Board of Directors were all gathered in support. The day our parents joined together as a community. The day our students could just have fun and be part of the extended FMS family.  The day our staff team stopped, smiled, and could take credit for the difference they make in children’s lives.

The rest, as they say, is history.  What a wonderful story of a school in the making and Thriving beyond……… 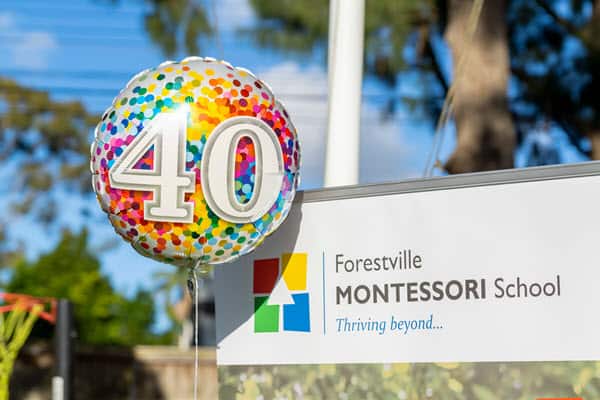 In keeping with our celebrations, the staff shared an Italian meal.  It was a wonderful opportunity to unwind after a very busy but rewarding time.  We are truly blessed with a wonderful team of staff at FMS.

“The child is both the hope and promise of mankind.”  Maria Montessori